The Good Garage Scheme asks; Can naps and caffeine cut risk of driving while tired?

Each year an estimated 300 people in the UK are killed on the road by drivers who fall asleep at the wheel. Tiredness has also shown to play a key factor in a staggering one in five of all road accidents each year in the UK.

So how can you minimise your risk of driving while tired?
Ideally, people would not drive when they feel sleepy, but in the real world this is hard to police. Other than getting a good night’s sleep and reducing daily stress, there are only short term fixes.

Studies have shown that listening to loud music or opening the window is only effective for around 15 minutes. Similarly a highly-caffeinated drink only relieved sleepiness for around 30 minutes in people who had no sleep at all the night before, although it was more effective if people had at least some sleep. The researchers, Reyner and Horne, concluded that the most effective methods for alleviating tiredness were to take a short nap of around 20 minutes and then have a caffeinated drink. 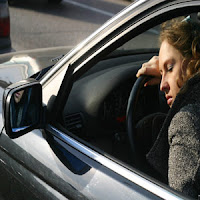 The Good Garage Scheme’s Top Tips
1. Get a good night’s sleep - try a hot malted drink to help you fall to sleep

2. Reduce stress levels – every day stress can highly influence crashes or ‘near misses’ while driving

3. Arrange work patterns so no business driving is required during early hours

4. Don’t drive between the hours of midnight and 6am, and 2pm to 4pm – these are the most at-risk periods for tiredness

5. Plan your journey to include a 15 minute break every two hours

7. Drink two cups of coffee or a high-caffeine drink and have a rest for 10 - 15 minutes to allow time for the caffeine to kick in

Posted by Good Garage Scheme at 15:29