‘Over fifty per cent of fixed speed cameras not in operation at any one time’, Good Garage Scheme hears.

Speed cameras have long been seen as a crucial deterrent in the never-ending battle to reduce road accidents.

A study conducted by Which? under the Freedom of Information Act has revealed that in England and Wales on average there are less than half of all fixed cameras in operation at any one time and in some counties, there are no fixed speed cameras at all.

Is the existence of the yellow camera box a sufficient deterrent as Which? also found the devices are moved around, dependent upon accident and speed data received?

Peter Rodger, chief examiner with the IAM, said: "A yellow camera box that has no camera is totally effective if it achieves casualty reduction with no prosecution. One that catches large numbers of people but doesn't reduce casualties is doing nothing useful. A yellow box has a huge psychological impression on drivers, whether or not it is live, and it is the effect of this that is important, rather than whether the camera is recording."

Which? editor Martyn Hocking added: "Speed cameras in some areas are always operational, whereas in others there could be a one in 10 chance the camera you've passed isn't working. It really is a tale of two counties." said. 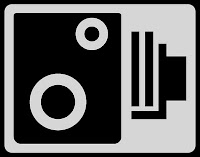 Posted by Good Garage Scheme at 17:05