Volkswagen has developed a new and original take on the famous Hackney Carriage aimed at handling some of the concerns of modern urban motoring. It combats emissions and space restrictions with its compact size of 3.73 metres and has a range of 186 miles between charges of its 45kW/h lithium-ion batteries. It has a top speed of up to 74 miles per hour.

It has a capacity of two passengers plus luggage (which is stored beside the driver) and has the City of London's coat of arms on its doors and a silver Union Jack emblazoned on the roof.  It is based upon the forthcoming city car titled “Up” but it is yet to fully meet the legal requirements that regulate Hackney Carriages. However, with EU regulations on emissions tightening all the time, the traditional taxi is on borrowed time and a lot of manufacturers are gearing up for a share of the future market.

Mayor of London Boris Johnson released proposals on how to combat emissions of the traditional taxis and improving London’s air quality on the same day as this new concept was launched in the capital.

At present, no launch date has yet been officially specified.  2013 has been mooted as a possible date for production but with green campaigns regularly in the news, it can only be a matter of time. 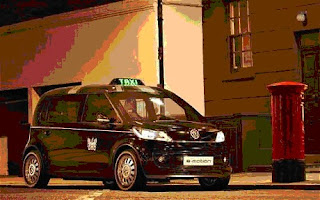 Posted by Good Garage Scheme at 17:11