Good Garage Scheme member Empire Garages in Enfield have had reason to celebrate.

The team at Empire Garages recently attended the Federation of Small Business Awards Ball at the Connaught Hotel in London as award finalists. 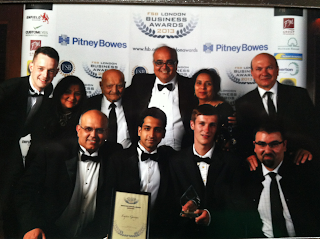 The Federation of Small Businesses (FSB) has 200,000 members and is the largest business organisation in the UK.  Boris Johnson's Deputy Mayor of London, Kit Malthouse, gave an inaugural speech and presented the awards. The gathering included political and business leaders and the category finalists.

Empire Garages' entry was scrutinised by a panel of ten judges and they were short-listed to the top six in the Customer Service Excellence Category. On the night Empire was awarded the winners' trophy.  A team of ten colleagues were present and the table was given a bottle of champagne to pop open and celebrate the night.

Team Empire kindly phoned the Good Garage Scheme's marketing manager the next day with the great news and thanked everyone for the support which they say has helped to achieve the award.

Well done and many congratulations to Ajay and Team Empire!
Posted by Good Garage Scheme at 16:56