It has to be said that some people view their car as their first love. Something must have motivated Mr Norman Hughes, one of the Directors of Good Garage Scheme member garage, Cleevewood Garages, to so lovingly restore a 1968 Ford Escort.

Mr Hughes’ story was featured in the Daily Mail  recently in an account of how he rebuilt the car that he purchased as parts in boxes. In 1968 it would have been sold for around £3,000, but it is now worth £65,000.

The car was a common sight in the 1960s and was one of the biggest selling cars at the time, but the last Mark I came off the production line in 1974 before Ford released the Mark II. 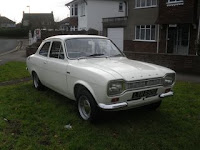 Mr Hughes’ car, fitted with a Lotus twin cam engine is one of only 883 hand-built Mark I Escorts. He says he’s unwilling to part with the car for under £65,000.

He said: 'I know it sounds like a lot of money, but I know how much time and money has been put into the car. I would say it is now better than new because of the lengths we have gone to in order to get it right.'

Among Mr Hughes’ tasks in his restoration was replacement of worn parts, rebuilding of the engine, back axle and the gearbox plus sandblasting and repainting the rusting shell of the car. Due to the rarity of the vehicle, locating items of trim caused his biggest problems. These included badges and dashboard switches.

Modifications underneath the car include, among others, disc brakes on the front wheels and an uprated suspension.

Mr Hughes added: 'I think I'm asking a fair price for something very rare and very special and which is better than new. It's a lot of fun and very reliable.' 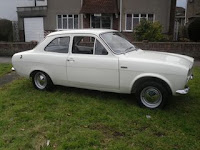 Read more and see further pictures in the Daily Mail article here. If you are interested in speaking to Mr Hughes about the car, you can find his details on Cleevewood Garages' page on the Good Garage Scheme website. 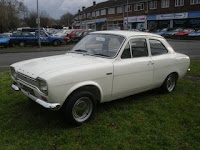 Posted by Good Garage Scheme at 16:55