Granville Auto Centre of Lytham St Annes, Lancashire has been crowned their regional winner in the nationwide Swift Awards, promoted by swiftcover.com.

Gemma Holderness of Granville Auto Centre said: ‘We are delighted to have won this award. It’s great that we’ve been recognised for customer service as we’re a business which has prided on its standards since it began.’

The garage has been chosen for their ability to provide ‘quick, reliable and hassle-free service to their customers’. From five regional finalists, Granville Autocare scooped the gold regional award.

Tina Shortle, a director at swiftcover.com said: ‘Granville deserves to be recognised for its tireless efforts in delivering such a high standard of service. The local communities and regions across the UK rely on small businesses and we want to champion them with this award. For the past three years, the Swift Awards have highlighted the work of more than 800 local businesses in the UK, and we think it’s time that these exceptional businesses are celebrated in the wider community.’ 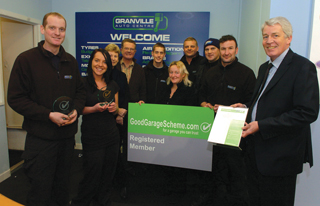 Posted by Good Garage Scheme at 16:07