Despite being illegal for nearly six years, the number of motorists using mobile phones has increased dramatically, casting serious doubt on the effectiveness of enforcement against law-breakers.

In 2009 drivers ignoring the mobile phone laws caused 31 fatal crashes, 70 crashes where one or more of the people involved were seriously injured and there were 534 casualties in total. In-car distraction, such as mobiles, changing music, drinking and eating, was identified as having led to 65 deaths, 469 serious injuries and a total of 4,763 casualties.

Reaction times dramatically slow even whilst using Bluetooth, so it is advisable to not use mobile phones at all. Even if you are using a hands-free set and are found to be not in total control of the car you can still be fined £60 and receive three penalty points. 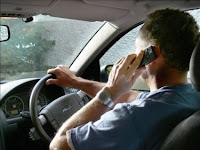 Posted by Good Garage Scheme at 15:52