One in ten drivers will be buying part worn tyres this year in an effort to save cash, but are used tyres a risk worth taking? A Trading Standards investigation recently revealed that 90 per cent of worn tyres sold are not legal and are putting unwitting drivers at risk.
The investigation carried out in Birmingham found that nine out of ten part worn tyres being sold failed to meet the minimum legal standards. It is expected that this is an example of a nationwide problem. A selection of 190 part worn tyres were examined, finding that 30 percent of tyres had structural failings including illegal tread depth, nails embedded in the casing, exposed cords and even one tyre that was 17 years old. Out of the 190 tyres, 90 per cent lacked the correct markings required which identify them as part worn. 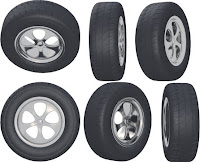 Some of the tyres were X-rayed to identify further internal damage, finding signs of impact damage meaning the tyres are much more likely to suffer a blowout whilst driving. The defects found would not be visible under normal inspections that part worn tyres must undergo before going on sale.
The Good Garage Scheme strongly advises purchasing new tyres where possible to ensure your safety. However, if you will be buying part worn tyres there are some vital points you need to check before purchasing:
• Ensure the tyres are permanently marked as part worn and have date markings.
• The tyres must have at least 2mm of tread depth around the whole tyre. Although the legal minimum depth is 1.6mm, a tread depth below 3mm has significantly reduced grip.
• See if the original grooves are clearly visible in their entirety, and check there are no holes, cuts or other discrepancies.
• Any repairs to the tyre must have been carried out in accordance with British Standards BS AU 159.

• Make sure the tyres you have inspected are the ones fitted to your car.
Posted by Good Garage Scheme at 13:04