Good Garage Scheme - The cost of motoring for used cars

Overall, used cars cost 22.87p per mile to run, in contrast with 18.49p per mile for new cars.
This is based on the costs of running cars aged between three and six years old with 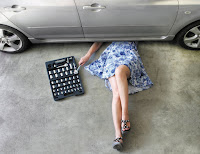 36,000 miles on the clock.
The annual running cost for a used car is £2,744. This is £525, or 24% higher than for new vehicles.
Why the difference in running costs between new and used?
Used cars are much more expensive to maintain, a massive £421 (115%) higher than new cars, with normal driving wear and tear and lapsed warranties on parts pushing up the annual costs of running a used car. Crucially, the majority of used vehicles require a significant investment in new tyres during the three to six year period in their lives, in line with manufacturer recommendations. This can equate to as much as 40% of annual maintenance costs.
Owners of used vehicles also pay an average of £29 (25%) more in road tax than owners of the same model new, due to improvements in carbon dioxide (CO2) emissions in recent years. These improvements equate to a £13 saving in fuel costs for new cars.


With thanks to our Source of information, RAC Cost of Motoring Index 2009
http://www.goodgaragescheme.com/
Posted by Good Garage Scheme at 12:40